In AX 2012 you had the ability to use Active Directory groups to help manage security within the application.

The basic setup behind this was that you would:

Here is a great overview of the setup of this functionality.

But what if you wanted to do the same process within D365FO with Azure AD groups?

Well we immediately run into an issue because out of the box this functionality is disabled, so how do we go about turning it on and getting it set up again?

Step one is we have to put our environment into ‘maintenance mode’.

Putting Your Environment Into Maintenance Mode

The reason we have to do this is because we have to change a setting on the License Configuration page (found at System Administration -> Setup -> License Configuration) to enabled Active Directory Group Security and to do that we have to put our environment into maintenance mode. If you don’t do this, you will get this nice warning when you go to the page and you will not be able to actually edit any of the configuration values.

Currently the only way to do this is via command prompt, but it appears that in the future there will be a way to do this via LCS. Instructions for this process can be found here.

Now when you go to System Administration -> Users will have a new entry called Groups. 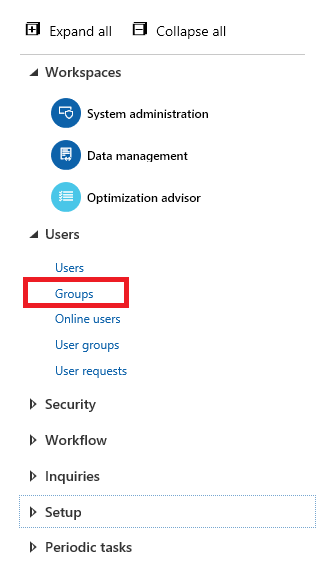 This page will look very similar to the Users setup screen, but you are setting up group security instead. The first thing to do is to import the Azure AD group you are looking to set up. 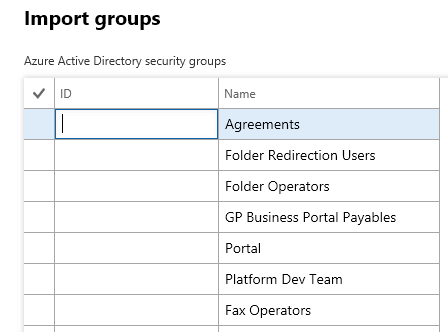 Once you select the group, you will notice the screen looks exactly like the User Info setup screen where you have a details area at the top and the roles you want to assign at the bottom.

Once this is setup the final step is to create each user of that group as a user within D365FO, but only assign them the System User role. Now going forward any user assigned to this group will automatically inherit the security the group has. In this way if you need to make a security change that will affect all users of a group you can make the change at the group level instead of going to each user one by one.

Note: A report like this one in Fastpath would help with this process, also all of Fastpath’s reports (including User and Role Access) fully support both AD group security as well as Azure AD group security setups in AX and D365FO.

I hope this post helped explain what the Azure AD group security functionality is, the benefits it can provide, things to look out for. If you have any questions about this please feel free to reach out.