One question I’ve had throughout the releases of D365FO has been why there wasn’t an ‘Undo’ or ‘Remove’ for a security change made within the user interface. Before security changes go live into the system, they first go to a staging area called ‘Unpublished Objects’, on this screen there is currently a ‘Publish all’ and ‘Publish selection’ but there is no way to undo a change once it has been made.

It is a feature that many users have asked about me about so I decided to look to see how feasible it was.

If you were modifying/removing AOT security layers then the tables used were:

I also found that an audit of all security changes were stored in the following tables:

And finally there was the header entry in the SecurityUnpublishedObjects table which stores a record of all security layers that have been modified but not published.

We can validate that they both show up in the Unpublished Objects area.

If we go to the SQL side we can see both show up here as well. In the SecurityUnpublishedObjects table we can see the header entry for each change I made. You can see that D365FO automatically generates the AOT identifier name for the ‘FP Custom Role’ role as a GUID.

The information in the Data column is the XML that would be generated if you created this object in the AOT, which is how the D365FO Security Converter that I created actually works.

Below is the XML data for the custom role that I created called ‘FP Custom Role’. 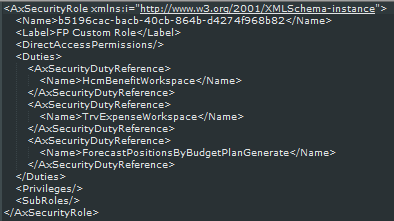 In the SecurityObjectEvent table, we can see the two changes made.

The EventType column is an enumeration of the SecurityObjectEventType enum.

In the example below, the LedgerAccountant entry in row 4 was the initial security and it was modified with the entry in row 1.

If we wanted to remove or undo a change to a security layer that exists in the AOT, this is a fairly straight forward process:

The situation becomes more complex when we want to undo or remove changes we made to security layers that were originally created in the user interface. As we cannot simply remove the records from the Security<Layer>Object tables as this would remove the entire security layer itself. Instead we would have to do the following steps:

As you may have gathered from from the screenshots above, I am working my way through creating this functionality and having it be a part of our Security Designer offering at Fastpath as a part of a larger piece of functionality surrounding reporting on security changes. If you are going to try and implement this yourself, there are some things to keep in mind:

I hope this walk through helps answer this question that many have had, if you have any questions feel free to reach out!