In a previous post, I discussed that I had started a GitHub project to be able to export security changes made in the user interface to AOT XML files. One of the ‘future improvements’ I wanted to add was the ability to rename security layer parameters during the export process. After some testing, I found that this feature was much more important than I originally thought (cue future blog post). As such, I prioritized this and was able to get this feature added fairly quickly, it is currently live on the Security Converter GitHub Project page.

If you look at the project now you will now see a display area that will show a listing the objects in your user interface security XML file. You can then click into any cell and modify the text within that cell. 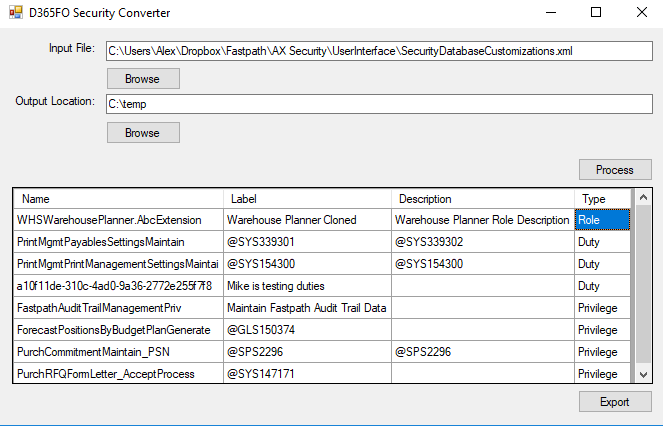 If you make any modifications, when you export those changes will be reflected in the exported XML. On the left is a straight export of the WHSWarehousePlanner role and on the right is the modified version I made from the application above.

I will make a full blog post about how to actually move security using the tool soon but I found in my testing that trying to utilize security where you were customizing out of box security (like the WHSWarehousePlanner above) required that a rename be done as otherwise would cause build failures and even some environment instability until the offending object was removed.

I would like to get a blog post out detailing different scenarios and how to use the Security Converter application to move that security between the user interface and AOT. I would also like to look to see about maybe adding in a default extension adding feature, so you could possibly add .<tag>Extension (like .AbcExtension above) to each element easily. Also any other ideas you guys have would also be appreciated.